Toshiko Nakagawa, The 106th President of the IEEJ 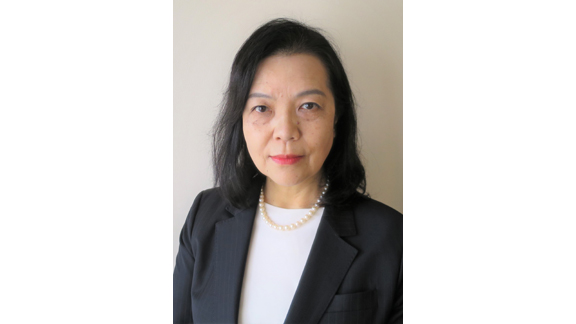 From the Heisei era to the Reiwa era!
Connect and open up the future with “collaboration of knowledge”

It is a great honor to be appointed the 106th president of the Institute of Electrical Engineers of Japan (IEEJ), at the recommendation of the IEEJ members. I intend to do my best in the role.
The IEEJ was established in May 1888 by pioneers who were full of enthusiasm and high ideals, and this May, it has greeted the Reiwa era via the Taisho, Showa, and Heisei eras.
Constructing a stable electric power infrastructure is the first step for a country towards prosperity. Thus, to support its construction from an academic aspect, the IEEJ worked closely with the government during that time. As a result, Japan has developed into one of the world’s leading industrial nations. By analogy with such a history, by constructing a completely novel type of infrastructure in the cyber-physical space harmonized with electrical engineering, information, and communication engineering, I expect Japan to move to a new stage of prosperity.
In recent years, “SDGs” are receiving a lot of attention and “Society 5.0” is the focus of attention in business and industry in Japan. However, in order to achieve these, more innovation is essential as well as the latest “science and technology.” On the other hand, the era has moved on from labor-intensive society to capital-intensive society and next will reach knowledge-intensive society. Thus, “collaboration of knowledge” is required to create novel “science and technology” and to defeat narrow academic-sectionalism, because “collaboration among diverse elements” can sometimes cause explosive reactions that have the potential to result in innovation.
Regarding “collaboration of knowledge,” I would like to make the following trials:
(1) Cooperation among the five sub-organizations of the IEEJ
(2) Collaboration among academic institutes for creating innovation
(3) Collaboration among industry, academia, and government for optimizing the correct utilization of all research results so that none are lost to “The Valley of Death.”
The success of these collaborations requires that the IEEJ plays the role of a matchmaker. In addition, it depends on the way the IEEJ conducts public relations.
I think that the phrase, “no one can be aware of it” is equal to “it does not exist from the beginning.” Similarly, if excellent research results made by IEEJ members or useful projects conducted by the IEEJ are not announced well, it is equal to the IEEJ not having conducted anything from the beginning. Therefore, the IEEJ would like to concentrate on public relations more than ever.
From the recent Hokkaido Blackout that resulted from a major earthquake last September, we were able to notice that “to cut off electricity is to cut off society.” Now that the Heisei era has given way to the Reiwa era, the Institute of Electrical Engineers of Japan will strengthen its “collaboration of knowledge” and open this new era for new innovation. Please join us in collaborating for the future of the Institute of Electrical Engineers of Japan.